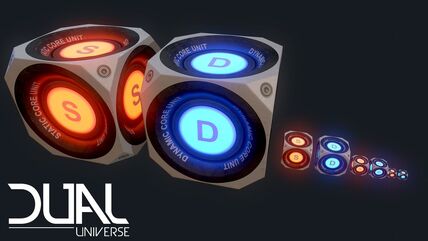 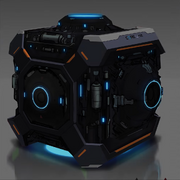 Sketch of a redesigned Core Unit

Core Units are elements that serve a number of critical purposes in construct creation. First, core units define ownership and administration for a construct. [1] They also identify a construct, providing information about its owner and who has permissions to edit it. They are also the nexus for all Lua scripts run on a given construct. Finally, core units can be used to create a blueprint for their construct, which can be used in manufacturing.

When placed, a core unit automatically creates a building zone around itself. The size of this zone is determined by the size of the core unit, with larger constructs requiring larger and more expensive cores. The dimensions of the construct within the building zone is limited only by the player's ability to gather the resources needed to build the construct. Eventually there will be core units that can be used to anchor multiple constructs together.

Additionally, core units come in two types: Static and Dynamic. Constructs with static core units cannot move, so dynamic units must be used for all vehicles and ships. However, static core units have several other advantages, such as the ability to fit specific elements, like the protection bubble, which allows for the creation of a safe zone similar to the one around the Arkship. There is a chance that at some point, it will be possible to "anchor" a dynamic construct to give it the benefits of a static construct, but this has not yet been decided upon. [2]