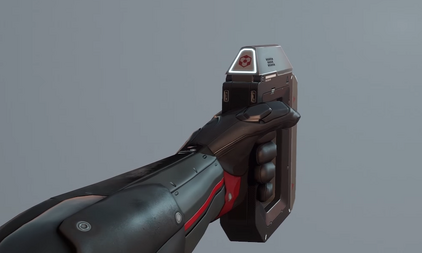 Pre-alpha rendering of the Nanoformer
The Nanoformer is a high-tech equipment integrated into the Player Character's right arm, and an external tool that can be used to perform a variety of options. It is always available to the player (it cannot be lost or destroyed), and it has part of the game's user interface built directly into it[1]. It has two essential functionalities: gathering materials from the environment, and using these resources to deploy a shape. This deploying ability is part of the process used to create a construct. Using it costs energy, which can come from a battery or, in last resort, by draining the character’s body heat in “life or death” situations when no other option is available. The Nanoformer can also be used as a light ranged weapon.
Nanoforming technology was developed around the year 2440, when the nano force was discovered. Nano forces use high frequency nano fields to precisely and accurately manipulate matter on a molecular scale, which is what allows the Nanoformer to assemble and disassemble matter.

These features can be upgraded to increase performance with different tools.

This Nanoformer tool enables the player to collect resources from the environment, digging holes of various shapes (depending on the choice of the player, via a specific interface). Digging with regular shapes like the cube or sphere will take a bit more time than the standard irregular digging process.

The Nanoformer can generate an area of molecular instability centered around the player and limited to the player's construct, where resources can be added or removed instantly, going back into the inventory. While not in this state, collecting resources from one's own construct will take the same time as if using the collect tool to gather resources. People who have no rights on the construct won't be able to remove/collect anything at all: the only way to create a "hole" in this area will be to "damage" (by hostile action) the construct.

This Nanoformer tool enables the player to create a voxel shape (a regular geometric figure made out of a given material). The geometric primitives currently planned are the:

This Nanoformer tool allows the player to smooth angles on a voxel shape, so that smooth surfaces can be shaped.

This Nanoformer tool enables the player to select a specific volume of voxels, called a "selected area". This volume can be adjusted by the following action:

Once the player has defined a "Selected Area", it is possible to copy this area into memory, storing all the Shape information (excluding active elements). This is called a Pattern. Patterns allow basic operations like Copy/Cut/Paste with Ctrl+C, Ctrl+X and Ctrl+P shortcut keys. A pattern is limited in size (typically 32m x 32m x 32m) and cannot be traded/exchanged in-game. You can think of it as a player-bound template.

While Patterns can be stored and copied in multiple instances anywhere in the building zone, Snapshots are a static photography of a particular "selected area", not limited in size and containing also active elements. Using this function, the player can create a "ghost" of the area, and, provided the player has enough materials, resources, and elements. he/she will be able to restore the area in the saved state later if it were damaged. You might think of snapshots as insurances on the information content of an area. The time required to complete this process is based on the size of the snapshot.

Replace a cube of a specific material in the world with your currently selected material. Everything under the surface is also replaced. This operation is equivalent to a Collect+Create operation.

Link two elements together by a virtual wire [2].

Information may be subject to change.

“Nanoformer” is a temporary name for the tool. It will most likely change during the game development.