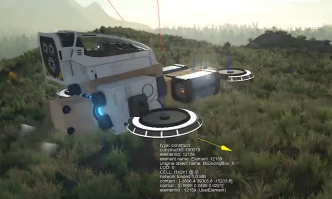 The physics engine in Dual Universe is based on Newtonian physics. What this means in game terms is that the more mass a construct has, the more thrust is needed to move it. Thrust is produced by engines, with different types and sizes producing different amounts of thrust. Adding additional engines to produce thrust beyond the minimum needed to move the construct will increase acceleration.

The placement of engines is also important because an engine applies force to the construct from the point where it is attached, which effects the flight pattern, stability, and turning radius of the construct. For example, a construct with hover blades on only one side will roll over. Even a ship that is balanced enough to move may not be efficiently using its engines to their maximum potential.

This point is not fully decided yet. But water mechanics should be limited like Minecraft, with a local voxel-based flow system.[1]