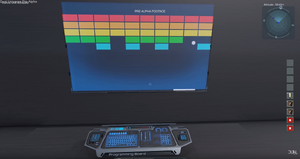 The Screen Unit is an interactive element that can display text, HTML, and SVG content in the game world similar to a billboard.[1] This element can also be modified by attaching screen units to command consoles, which allows the screen to be modified via LUA scripting.[1] These scripts can then be used for virtually any purpose the player desires, from advertising, to displaying critical ship information, to playing games. The engine used to display the content is the Coherent GT engine from Coherent Labs.[2][3]