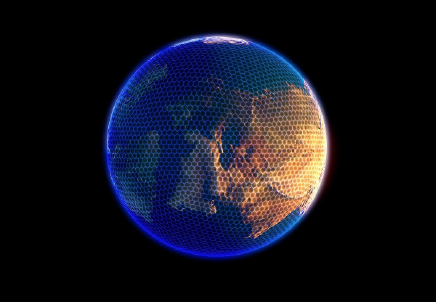 Territory Control is the gameplay mechanic behind claiming, owning, and operating territories both on the surface of worlds, and in space. The mechanic revolves around a system of placeable Territory Control Units (TCUs) and the Rights & Duties Management System (RDMS) to enable players to claim an exclusive right to a territory, and to do with it as they please. The stated purpose of this system is to enable players to act out a system of geo-political conflict between individual players and organizations for the control of resources and prime real estate.

Planetary territory tiles, or simply tiles, are the basic unit of territory control within which a player or organization can place and maintain a Territory Control Unit in order to control that part of the surface. These tiles will be 1km (~1100 yards) wide hexagons, extending from 1km above the surface to the center of the planet. Tiles are visible on the minimap called by pressing F4, and visible throught the enhance HUD by pressing V[1]. It is notable that while the vast majority of tiles will be hexagons, due to the nature of a spherical shape, a few tiles will be pentagons in order to cover the entirety of a planet. Utilizing the RDMS, players and organizations will be able to give, lease, or allow other players and organizations access to tiles they own or operate.

The vast majority of the tiles on day 1 will be neutral and therefore freely able to be claimed by any player or organization. At this time, it is unclear whether the pre-designated safe-zones will contain neutral tiles claimable by players or if they will be held in trust for use by the general public. 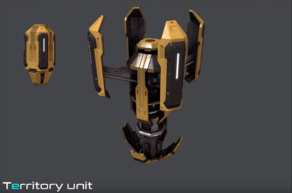 A Territory Control Unit is the physical asset through which a player or organization can claim ownership of a tile. TCUs can be placed anywhere within a neutral territory, even underground; they just have to be within the boundaries of the territory (see above for territory boundaries). The creator of the TCU can then share its rights (to dig or build[1]) with anyone they choose, notably those in control of the territories around them, if they don't own those territories already. This centralization aspect is intended to encourage the growth of nation-states where a central defensible capital can be established to maintain control over several tiles at once. At this time, not much is known about the TU asset itself, other than it will be fairly expensive and difficult to construct, with some of the resources necessary available only outside of the Arkship's safe-zone.

When a player controls territory of adjacent tiles, their effect can be combined into a larger, single TCU. This TCU is stronger and more easily defendable; however, if this single TCU is lost, then control of all territories it was affecting is lost with it. Alternatively, each territory in many owned adjacent territories can each remain under the control of their own, single TCU. This makes attacking any one of them easier, but one of them is lost, then only the territory of that respective TCU is lost with it.