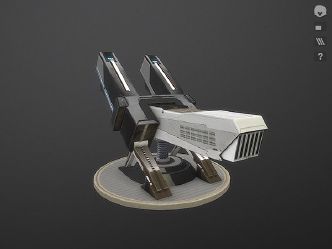 Players will be able to outfit their constructs (space ships, vehicles, and buildings) with the armaments of their choice, with each weapon type having its own damage, range, rate of fire, and energy requirements. Construct weapons will also come in a variety of sizes, with each serving its own purpose on different sized ships. While several examples of construct weapon models have been displayed in various development diaries, no details on their specifications and abilities have been released at this time. However, construct v construct combat is a confirmed feature of the game, and will be present and functional when the game is released.

Character weapons are simply carried in each player's inventory, and when equipped they allow players to engage in combat with other players and constructs. Unfortunately, we have very little information about the nature of character weapons, though their presence in the game has been confirmed.

Both types of weapons are all pre-made items developed by Novaquark, and as such there will only be a limited number to choose from at release. A system to allow players to create their own weapons may be implemented in the future, but this is not an immediate development priority.[1] If players want to make their own weapons, then a devoted 3D modeler would be required geared specifically towards Dual Universe, which would take a tremendous amount of development time.[2]

Finally, while there will be a wide variety of weapon types, with varying power levels, it will not be possible to construct a weapon powerful enough to destroy a planet.[3]